Discover the trailer of THE LAST FULL MEASURE 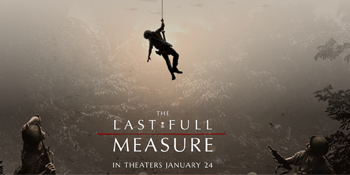 Written and directed by Todd Robinson (Phantom), the film boasts an impressive cast led by Sebastian Stan (Avengers: Endgame), as a political aide sent to collect stories on the allegedly heroic William Pitsenbarger (Jeremy Irvine), who is in talks to posthumously receive a decoration upgrade to a Medal of Honor.

Have a look at the trailer here