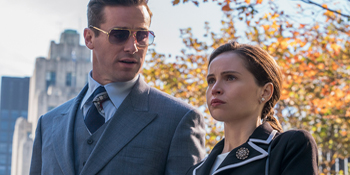 Felicity Jones transforms into a young RBG alongside Armie Hammer as her longtime husband, Marty Ginsburg.

The film follows Bader Ginsburg’s first-ever case in which she and Marty, a tax lawyer, fought for a bachelor who was refused a Social Security benefit for in-home caretakers on the basis that he was a man. The landmark case impacted more than a hundred discriminatory laws.

That’s what’s fascinating about Ruth. She fights for both men and women,” Jones says. “Equality for everyone ultimately creates a much better society. Stereotypical gender roles are limiting for everyone.”